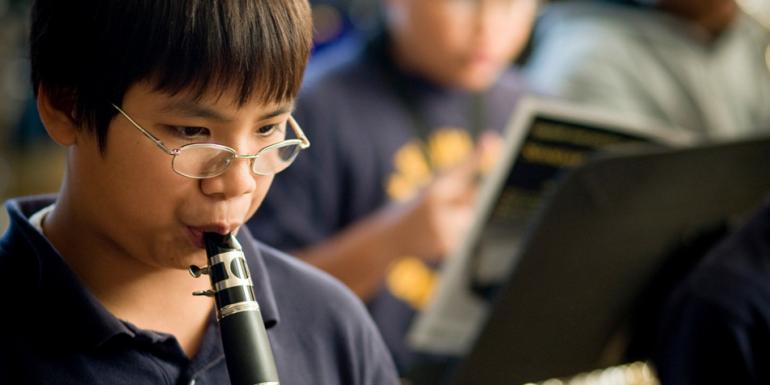 If educators want to develop critical, creative thinkers who can set and accomplish their own goals — and who can use those skills to strengthen their math and reading skills — they may want to take another look inside the music room.

For a child to play an instrument, she needs to stick to her goals, pay sustained attention, and be flexible enough to switch back and forth between tempos and styles. These habits draw heavily on executive function (EF) skills, cognitive processes that include problem-solving, goal setting, and flexible thinking. Anumber of studies have found that EF skills contribute hugely to students’ success in math and reading.

But music doesn’t just require EF skills; it may be a pathway to building them. That’s according to findings by developmental psychologist Nadine Gaab, whose work shows that people who play a musical instrument regularly have higher executive function skills than non-musicians — a significant finding for educators.

In a 2014 study, Gaab and her research team, including Jennifer Zuk, Ed.M.’10; Christopher Benjamin; and Arnold Kenyon, examined 30 adults between 18 and 35, and 27 children between 9 and 12. Half the participants were “musical”: The adult musicians either were seeking or had obtained a performance degree and practiced at least eight hours a week, and the children had been taking private instrumental lessons for an average of 5.2 years.

The researchers examined the participants as they performed various tasks measuring EF skills. In a “verbal fluency” test, for example, the participants had to name in one minute as many words as possible starting with an assigned letter, excluding people, places, or numbers. In a “trail making” test, they had to draw straight lines as quickly as possible connecting numbers and letters in numerical and chronological order, while switching between numbers and letters.

The children in the study also performed several “set shifting” tasks under an fMRI, in which they had to press different buttons depending on audio and visual stimuli.

Overall, the musical participants performed better on several, although not all, of the executive function tests.

IMPLICATIONS FOR FAMILIES AND SCHOOLS

Practicing a musical instrument, it seems, is directly correlated with increased executive function. So should parents rush to sign up their children for private lessons? Should schools redouble their focus on music?
Possibly, says Gaab. Their study was not a longitudinal one, in which researchers would have analyzed a group of children before beginning their musical training and then again after they had been regularly practicing. Consequently, she cannot say with certainty if practicing music increases EF, or if it’s the other way around. “Kids and adults who have really good executive function skills might stick longer with music or might be more drawn toward music,” explains Gaab.
However, this research does answer a crucial question left open by other studies that have found a link

between music and cognitive function. A child musician might have strong EF skills because a family that can afford private instrument lessons is likely providing other forms of enrichment too, such as a language-rich household or stimulating summer camps. Gaab’s study controlled for IQ and socioeconomic status, however, showing that musical training, not other experiences, is the factor linked to EF.

So while the exact causal connection between executive function and music remains unclear, the researchers still advise schools to take note. “Replacing music programs with reading or math instruction in our nation’s school curricula in order to boost standardized test scores,” they write, “may actually lead to deficient skills in other cognitive areas.”