By Li Wenfang and Zheng Caixiong in Guangzhou(China Daily USA)

The Shenzhen Stock Exchange listed company now holds 90 percent of the shares in Schimmel-Verwaltungs GmbH, valued at 23.99 million euro ($27.1 million), it said in a statement.

Li Jianning, Pearl River Piano's vice-chairman and general manager, said the purchase will ensure Schimmel can continue to be independent, and continue to manufacture some of the world's highest quality pianos.

Yang Weihua, secretary of its board of directors, added the purchase will also help raise his own products to a higher level.

After more than 130 years in business, Schimmel is also Europe's largest piano maker.

"Compared with major piano manufacturers, our brand still has to be lifted onto the world stage, although our products are already exported to more than 180 nations and regions," Yang said. 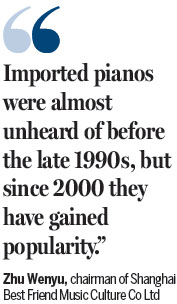 The German piano maker builds its instruments at two factories in Germany and Poland, and those operations will be unaffected by the acquisition, the statement insisted.

The statement said it has huge potential to expand its presence in the mainland.

Pearl River Piano celebrates its 60th anniversary this year, and is believed to be the world's largest manufacturer, selling 131,590 of the 135,432 pianos it produced last year.

It claims to have produced 35 percent of China's pianos and a quarter of the world's, after selling more than 2 million in its lifetime.